PostGIS, pgRouting, and other spatial extensions


Buy our books! at http://postgis.us/page_buy_book 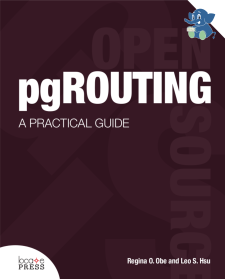 Expose you to some spatial extensions and show you what you can do with them. By spatial, we mean any extension used to store, manage, analyze, or change objects in space.

Many extensions on this diagram rely on the extension called, postgis. ... lines are not hard dependencies, but extension can use if dependent extension is installed.

The extensions shown on this chart can all be installed using CREATE EXTENSION.

In the box with the heading PostGIS are the extensions that are part of the repository and source tar ball of PostGIS. When you install the binaries of PostGIS you get most of these at your disposal. Most extensions packaged with PostGIS rely on the core extension called postgis.

Note we also have highlighted oracle_fdw as a spatial extension which may seem odd to some people. This is because oracle_fdw is aware of Oracle's SDO_GEOMETRY and functions and translates those to PostGIS's companion offerings. Both PostGIS and Oracle follow the SQL/Multi-media spec to some extent. They model space in much the same way and thus can be easily translated back and forth between their representations.

Another kind of space modeling not covered under the PostGIS package of extensions, is what are called point clouds which are generated by devices like satellites, drones, and planes. They are the rawest form of gis data and often used to create other forms. point clouds are generally huge big globs of points easily in the billions where each point can have one or more attributes. The pointcloud extension stores these in nuggets of patches for optimal compression of redundant attribute data. We'll show an example of what this looks like if we have time.

In later sections, we'll highlight the colored in ones - postgis, pgrouting, and ogrfdw.

How many people in this room use PostGIS?

When I started using PostGIS around 2002, it was this little library with a small friendly community. You installed it by running some sql scripts in a database I had never heard of called, PostgreSQL. In it's 0.5 version, it had its geometry type which could only handle 2-Dimensional things and treated all surfaces as flat and it had only a few functions for doing distance, intersects, but even in its early form it could handle some pretty hairy objects and correctly compute distances. The founders chose to build on PostgreSQL instead of MySQL because PostgreSQL had an extensible type system more suited for hooking in foreign things which allowed for PostGIS to innovate outside of the PostgreSQL project. It also had already spatial types. Though the spatial types in the end were decided not usable for geospatial needs, they did provide an example framework of how foreign types could work and how to hook into the index bindings offered by PostgreSQL. MySQL spatial offering has almost caught up to PostGIS circa 2002.

Flashforward today and PostGIS, still has its flagship geometry type, which now supports Z dimension, M dimension (often used for managing trajectories (time component)), both areal 3D surfaces and some support for volumetric spaces. In addition it has a round world geography type and a raster type.

PostGIS allows you to transform between coordinate systems.

People record data on grid well suited for their little piece of space. HOw do you know if you are talking about the same spac

The world may not be flat but it's convenient to model it as such.

Model of space as spheroid. Takes into consideration the earth or any given planet whose spatial reference is defined in spatial_ref_sys table.

Bands / Channels -- correspond to the matrices in raster. For example an RGB picture has 3 matrices.

PostGIS rasters are often georeferenced meaning they have information that dictates the particular position in geographic space they are located. So they can be conjoined with PostGIS geometry by location.

The topogeometry is how topology represents a geometry. It is a reference to a bunch of edges, nodes, and faces that make up the geometry.

In a topology all spaces are connected, your neighbors plot of land shares and edge with your land, thus moving the boundary of between your land and his land changes both your plots. There are many other ways of thinking about space which we'll cover when we get into the depths of the postgis core extension. On the other side are other spatial extensions not packaged with PostGIS.

PostGIS since 2.2 comes with extension address_standardizer. Also included since PostGIS 2.0 is postgis_tiger_geocoder (only useful for US).

Lower the rating the more confident the result. By default geocoder uses built-in standardizer, wrap with geocode(pagc_normalize_address(..)) to utilize address_standardizer extension instead.

Given a longitude/latitude or GeoHash, give a textual description of where that is. Using postgis_tiger_geocoder reverse_geocode function

What are point clouds?

A cloud of points where each point can have many numeric attribute associated with it. It is collected by satellites, drones, and planes and used to develop the other forms of data raster and vector. Most popular format is LiDAR (Light detection and Ranging).

How to store pointclouds in PostgreSQL

PostGIS Bundle for windows (EDB) includes this extension. Will install both pointcloud and pointcloud_postgis as well as postgis if it isn't already installed.

Doesn't require PostGIS to use, but will expose spatial columns as PostGIS geometry if PostGIS is installed.

If you have all sorts of data of both a spatial and non-spatial flavor to tame, make sure you have ogr_fdw foreign data wrapper in your tool belt.

Why is ogr_fdw so great?

You have the combined power of Geospatial Data Abstraction Layer (GDAL), PostgreSQL, and any PostgreSQL extension you want (including PostGIS) working seamlessly together. So many kinds of data you can query and take advantage of PostgreSQL functions and any extension functions and types such as PostGIS, hstore, built-in json/jsonb to tame your data.

Enable it in your database

Format for SQL Server ODBC 'ODBC:your_user/your_password@yourDSN,table1,table2'. ODBC can be slow with a lot of tables (more than 150) so filter list if you have over 200 tables

Link in a whole folder of ESRI Shapefiles and Dbase files

Each workbook is considered a server and each sheet a table

Before SELECT * FROM staging.usd; After

Memorable recent moments of change in PostgreSQL that elevated PostGIS.

PostGIS is a great as it is to a large part because of the ease with which it can take advantage of changes in PostgreSQL. This is because PostgreSQL makes it easy for extensions to leverage it's plumbing for their own needs, perhaps more so than any other DBMS. While many of these changes did require change in PostGIS, many came for free.

The extension model was the single biggest usability offering for PostGIS. It relieved the need to find where scripts are, which allowed many newbies to jump on. It provided a simple way for DbaaS to control extension install, which we attribute for PostGIS adoption by Amazon, Google, and Microsoft.

LATERAL support in PostgreSQL didn't require us to change any PostGIS could, but it did change the landscape of how PostGIS users would write queries. Spatial operations often require a lot of explode this thing into bits and collect it back. Such operations are a poster child for LATERAL and simplified queries as well as making them faster.

PostgreSQL introduced KNN in 9.1 and PostGIS 2.0 followed by offering it, but it couldn't be used for true distance so required some ugly hacks to use with anything that wasn't a point. The true promise of it came in PostgreSQL 9.5, and PostGIS 2.2 exposed it for PostgreSQL 9.5+.

PostGIS aggregates get elevated with ORDER BY in 9.0

Before aggregate ORDER BY

After aggregate ORDER BY

PostGIS has a number of aggregate functions. In many cases order is not important, but in a few it is. The ORDER BY clause is particularly useful of you have a set of gps_points and you are trying to create a linestring that defines travel path of a vehicle.

PostGIS embraces the extension model in 9.1


Find where your package install put the PostGIS scripts.


Install in your database

PostGIS 2.0 much bigger / 9.1 provides easy install solution. Easier for users to get on board and cloud providers to offer it.

Before LATERAL
After LATERAL

LATERAL was a freebie. PostGIS is chuck full of set returning functions.

Lots of things depend on PostGIS

Partial Solution: PostGIS changes from being a relocatable extension to being non-relocatable in 2.3

To amerliorate some of these problems, in PostGIS 2.3, PostGIS was forced to be not schema relocatable.


2 closest roads to each point of interest

After True KNN with LATERAL

Queries didn't change, but some got a lot faster. Like ST_Intersects checks could be done in parallel. PostGIS 2.5.0alpha recently released with first parallel aggregate ST_AsMVT. Can build Mapbox Vector Tiles in parallel mode and recombine the final output.